Before last month, Seán McCormack would have never hiked up a steep mountain for fun. But McCormack and his friend, Ross Tweedie, recently went on an epic 12-hour trek in northern Taiwan just to help a tiny, injured dog.

It all started when someone forwarded a Facebook photo to McCormack, an independent dog rescuer based in northern Taiwan. In the photo, the 1-year-old dog was curled up in an unused metal kiln outside a guest house in Taroko National Park.

When McCormack got in touch with the woman who took the photo, she explained that she saw the dog, now named Sandy, on a hiking trip, and she was concerned about his injuries — Sandy had lost his front right paw in a trap, and his front left leg had a more serious injury from a snare. 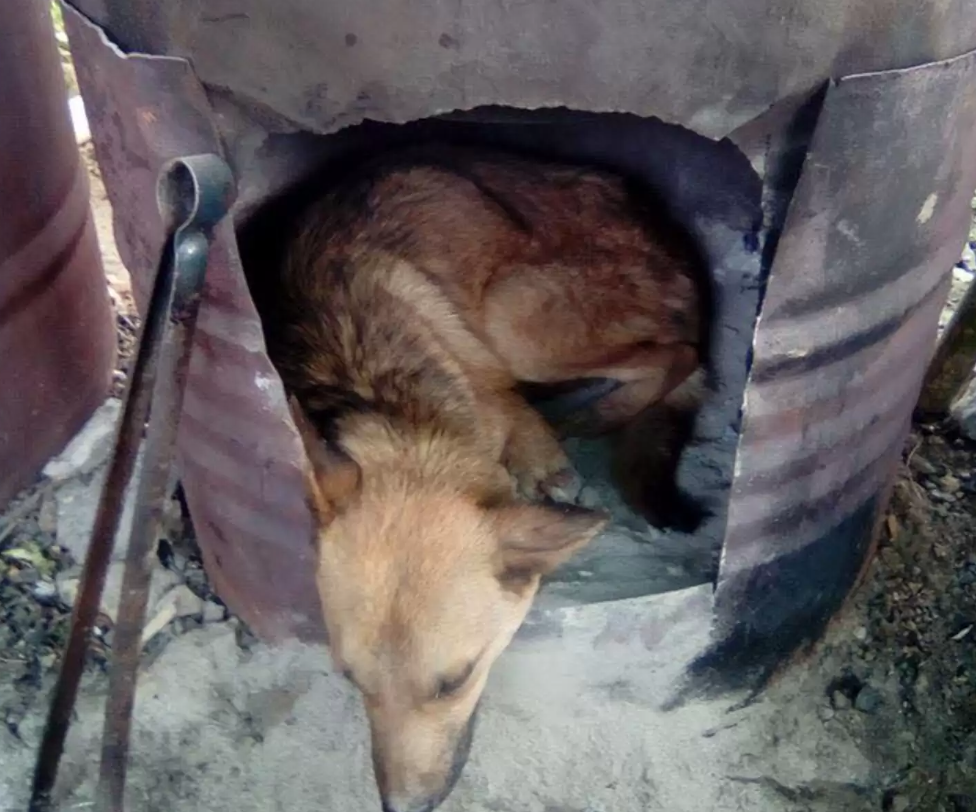 “There’s a big problem in Taiwan with traps and snares,” McCormack said. “Most of our rescues are dogs who have been maimed by one of these devices.”

McCormack assured the woman that he’d rescue the dog, but at the time, he had no idea what he was getting into. He initially assumed he could drive there.

“The lady said, ‘It’s a six-hour hike,’ and I thought, ‘There must be a back road. There must be because there’s a guest house there. And Google Maps said I could drive there,’” McCormack said.

But McCormack was very wrong — there was no road, and he definitely couldn’t drive there. The only way to the guest house was to hike a steep, slippery trail. Six hours up and six hours down. 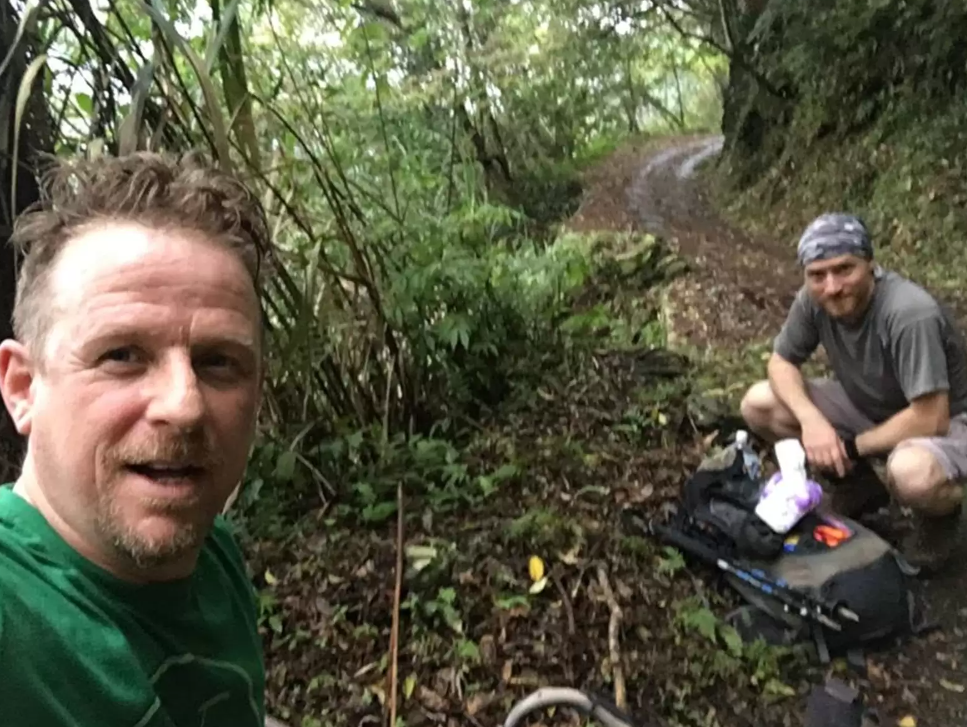 McCormack wasn’t in ideal physical shape for this kind of hike, but he was determined to help Sandy. So he reached out to his friend Tweedie, co-owner of a trekking company called Taiwan Adventures, to ask if he’d help him get up there. Tweedie, who often helps McCormack with dog rescues, agreed, but he knew this hike wasn’t going to be easy.

“It’s a brutal hike,” Tweedie told The Dodo. “It’s not one for beginners, and Sean was in the beginner category. He told me that he hadn’t done anything like that before.”

Despite the challenges ahead, the two men set off one morning in late March to rescue Sandy.

The hike was even more challenging than McCormack imagined, and he nearly gave up several times. And Tweedie had started to worry about taking Sandy from the village where the guest house was located — the dog might actually belong to someone, he realized, and he didn’t want to upset anyone. But when they finally reached the guest house after six arduous hours, they were faced with a new problem — they couldn’t find the dog.

“We looked in the outside kitchen area, but the dog wasn’t there,” McCormack said. “We didn’t say anything to each other, but I know we were both thinking, ‘Oh crap.’”

Then they saw some movement underneath a stack of plastic chairs. “This little dog was under there, wagging his whole back end,” McCormack said. “Once we saw him, we both just changed our attitudes again — I suddenly had a lot of energy, and Ross was going to get that dog out no matter who complained about it.”

“He came and put his head on my lap, and he was just looking like he wanted a hug,” McCormack added. 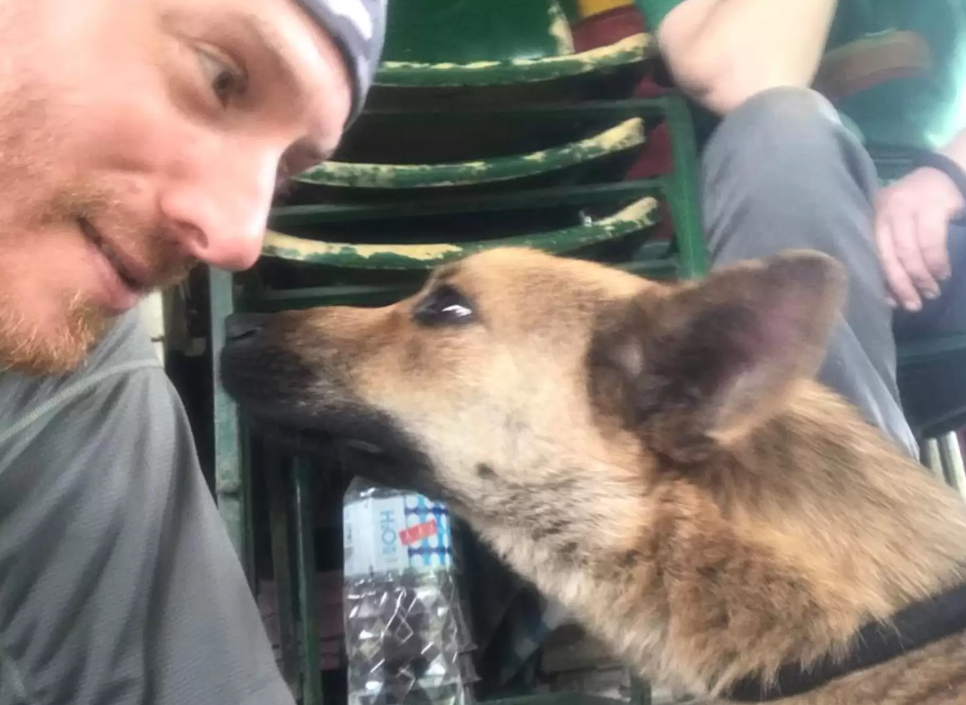 Sandy was in rough shape, and he likely wouldn’t have survived much longer if he’d been left there. It looked like Sandy’s right front paw had been cut off in a trap a while ago, and that injury had mostly healed. But Sandy’s left front leg was a different story — a snare had sliced high up on the leg and the bone was visible.

“He was very happy to see us, but obviously in pain,” McCormack said. “When we bandaged up his leg, he was so good.”

McCormack and Tweedie knew that Sandy needed a vet as quickly as possible, so they decided to immediately return down the mountain, which meant another six hours of hiking. So they loaded Sandy into Tweedie’s backpack, and took turns carrying him down the mountain. 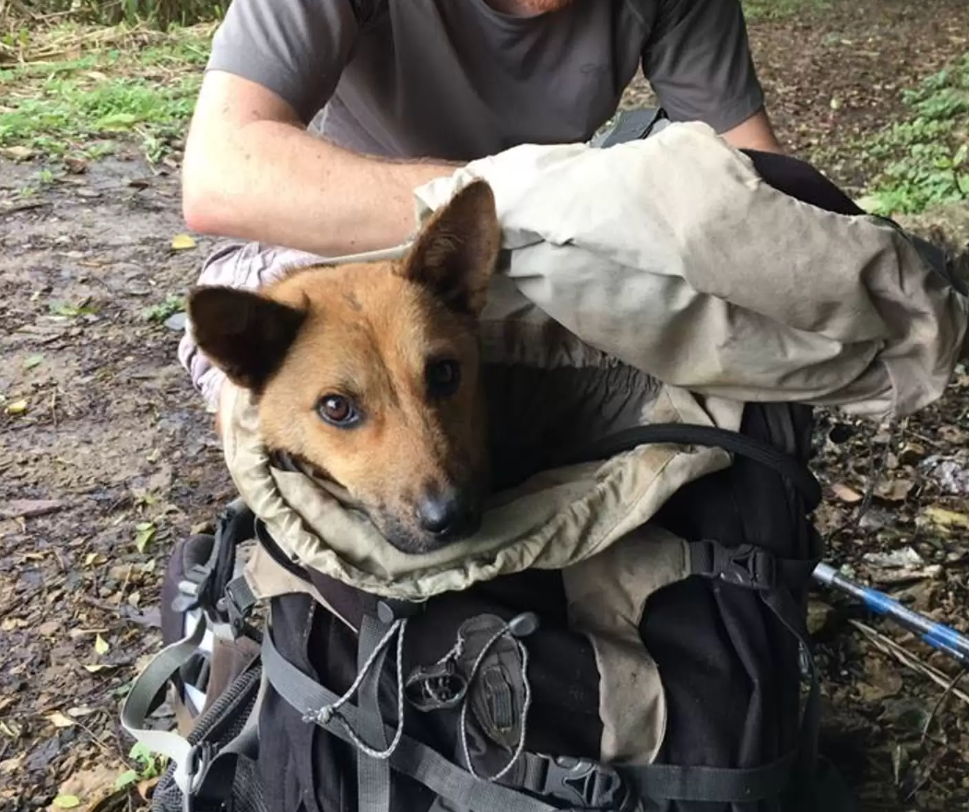 When they finally reached the bottom, McCormack rushed Sandy to the vet, who ended up amputating sections of both front legs, which helped save Sandy’s life. Once Sandy’s stumps have healed, Sandy will be fitted with special prosthetics to help him get around.

“He’s doing amazingly well,” said McCormack, who is keeping Sandy at his house while he gets better. “He was just so happy. He immediately started playing with some of the younger dogs here, and he’s just a very sweet, happy dog.”

When Sandy does fully recover, he has a forever home to go to — a restaurant owner in Taipei read about Sandy’s rescue story on social media and offered to adopt him. McCormack and Tweedie couldn’t be happier about how it all worked out.

“We were both proud that we’d gone to this huge effort,” McCormack said. “When you transform the life of an animal, especially one that isn’t likely to get help from anyone else … it’s a very fulfilling thing to do.”

“It all came together,” Tweedie said. “There were so many things that could have gone wrong, but it didn’t. It was very much worth every second and every pound of sweat.”