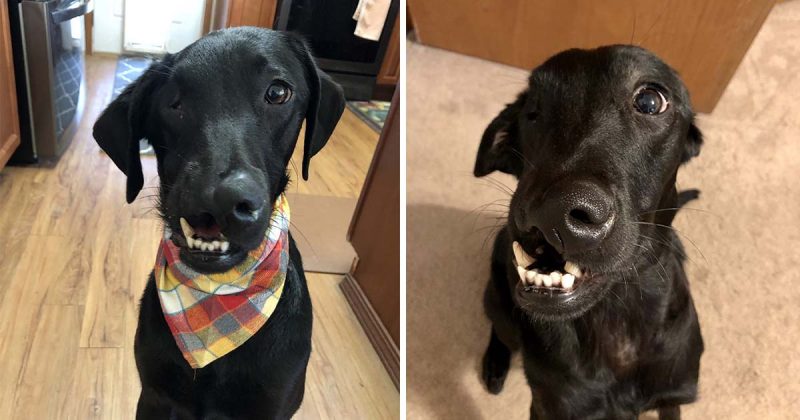 This dog has come a long way and just received successful surgery to fix his mouth. Felix is now well and cheerful, and he even took his first walk to the river in a long time.

“I’ve been caring for Felix since he was 11 days old. I was the rescue worker summoned by the breeder after they realized that one of their litter’s puppies was not flourishing and was in fact dying due to a severe cleft palate and cleft lip, preventing him from properly feeding on his mother.

“At this time, he had acquired aspiration pneumonia and was not going to live another 24 hours.” I brought him home with me and fed him through a tube for the following seven weeks. I also helped him with his pneumonia. He’s currently a 14-month-old mature black Labrador retriever!’

The exact etiology of cleft lip and palate is unknown. According to Jamie, this abnormality can emerge in people and animals as a result of inadequate diet or prenatal exposure to particular products.

Felix is a warrior who doesn’t allow his medical issues stop him from enjoying himself and having a good time. This Labrador also has digestive issues due to the fact that his intestines was created on the other side of his body; he only has one functional eyeball, and his jaws are misaligned. His face has a distinct aspect.

“He can only consume canned food since none of his teeth match. I offer him hard food now and again to make him feel like he’s part of the gang, but he has a hard time picking it up. Nonetheless, it keeps him occupied.

Felix had surgery to fix his clefts in January of this year. The dog has a unilateral cleft palate that affects both the hard and soft palates, according to his parent. The veterinarian did an excellent job, and he was able to rebuild his palate difficulties using his own tissue.

Felix was unable to eat or drink regularly prior to his operation. Every time he fed, his father cleansed the food from his cleft.

“Since his operation, he has developed a neurological tic that causes him to spin and bark into the air on occasion, most likely owing to the dislocation of his skull. We’re putting new medications to the test to see whether they can assist him.

Felix is from a huge family with four furry brothers, one of which, Samy, has cleft troubles as well, although not as bad as Felix’s and has not required surgery. PB, a 12-year-old dachshund, a charming terrier, and Meera, who looks like a greyhound, are his other rescued siblings.

“He’s blissfully unaware of his health issues, and he has more energy than he or I know what to do with.” Last weekend, I was able to take him swimming for the first time in his life, and he performed fantastic. I’m hoping I’ll be able to teach him to be a “genuine retriever.”

Felix enjoys playing, and following his operation, he has been able to grasp toys in his mouth once more; he is also quite strong and lively.

“He had a feeding tube coming out of his neck after his operation, and I had to pump liquid dog food for a few weeks.” He never complained and remained completely still while doing it.

But he’s a wicked boy, and he ate two of his toys just days after his operation, necessitating yet another surgery.