Ever had an animal walk you home from school or from a friend’s house? You know, like a random kitten or a puppy you didn’t know would follow you, probably wanting a treat, a pet, or just friendship, and end up inviting itself into your home, if not your entire life?

Well, the Caballero family from Tempe, Arizona were outside on their regularly scheduled walk with their dog named Olive when they were joined by a tiny baby gray fox. Now, apparently, the critter mistook the family’s terrier for her mother and started following them around the neighborhood.

The fox was about 20 centimeters in length (for reference, she could fit in the palms of your hands) and had a coat of varying shades of gray. They later found out that she was just 6 weeks old at that point. 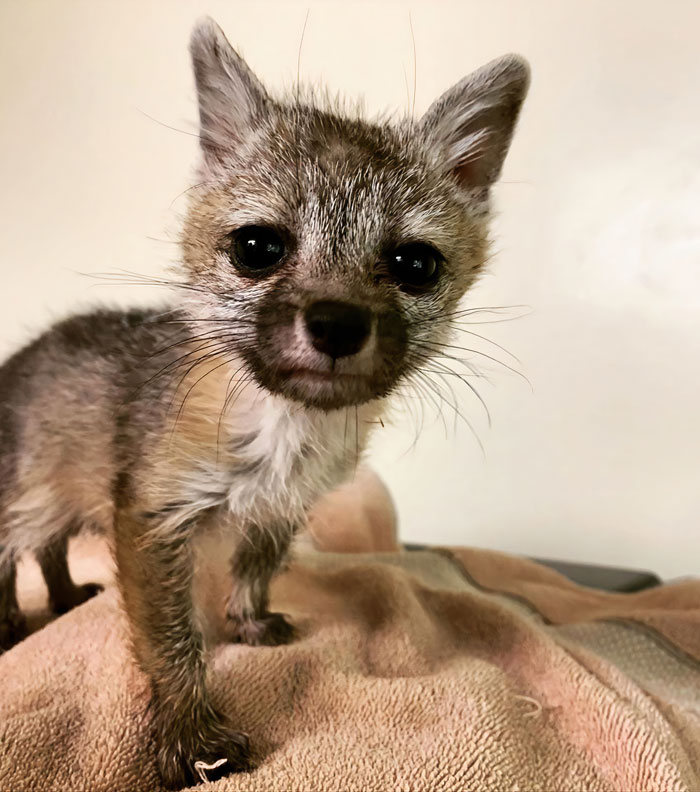 The tiny fox followed them home, where the sprinklers were on at that moment, so she ran to have a drink, which is when Rosalyn noticed how thirsty she was as she couldn’t stop drinking—she just kept gulping and gulping.

Pairing that with the fact that the fox was far away from home and her mother, alone—something that is not typical of foxes as they are pack animals—the family decided it would be best to get in touch with Southwest Wildlife Conservation Center for help. Bored Panda got in touch with the conservation center as well for more information.

The three found a box and captured the baby fox so that she wouldn’t wander off into danger. They got the fox inside the box without touching her, simply luring her in. And though calling her a Fox in the Box is a cute and endearing name, the kids were quick to name her Foxy.

The fox was soon brought to the Southwest Wildlife Conservation Center. She was first fed using syringes, but now has learned how to eat on her own from a bowl. 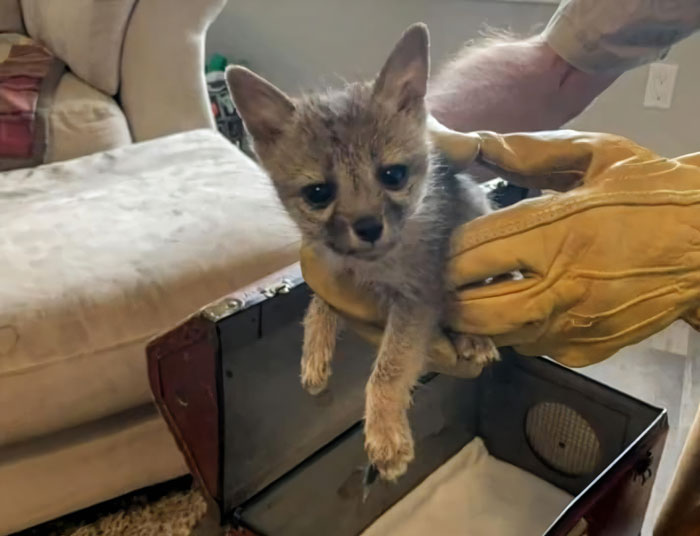 “She appears to be doing quite well. She was a little dehydrated when we got her, but otherwise healthy. She was already eating solid food, so we’ve managed to fatten her up a bit in the short time she’s been at Southwest Wildlife. All indications are—from a health perspective—that she’s like to grow up into a strong, healthy girl,” explained Jim Mitchell of the Southwest Wildlife Conservation Center.n

Turns out that this isn’t the first time gray foxes have been spotted in the area as the family saw a pack of them walking past their garden last year. However, what was out of the ordinary was that Foxy was alone, dehydrated, and obviously lost.

Foxy is now in good hands, being taken care of at the Southwest Wildlife Conservation Center. They are hoping to bond Foxy with some of the other foxes that came to the center recently to be released into the wild once they are strong enough.

“The process is a little more complex than ‘nurse and release’. Once they’re able to be moved to an outdoor enclosure (they start off in the ‘maternity ward’ of our onsite clinic), we’ll see how they act—do they eat well? Do they cower from humans? Do they make normal animal sounds?” elaborated Jim Mitchell. “If all of those are yes, we move them in with other animals of their own species in our rehabilitation area. In ‘rehab’, they usually get a foster parent (or parents)—and adult of their species who can’t be released (usually for medical reasons), but retains many ‘wild’ traits. While they get fed by humans every day, rehab is a ‘no talking’ zone, and our staff and volunteers try not to make eye contact with the residents.”

He continued: “When our Animal Care staff determine that the animal is old enough and strong enough for release, we’ll pick an isolated spot (sometimes with help of Arizona Game and Fish) and release them, usually at least 2 at a time, so they have company. About 70% of all the animal we take in are eventually released back into the wild. Those who can’t be released are either injured (blind, missing a limb or other issues that would make them unfit to survive in the wild) or ‘habituated’ (usually those that have been kept as pets, see humans as ‘friends’, and would end up in populated areas, rather than remaining in the wilderness. Those animals remain with us in our Sanctuary—where they have a home for the rest of their lives.” 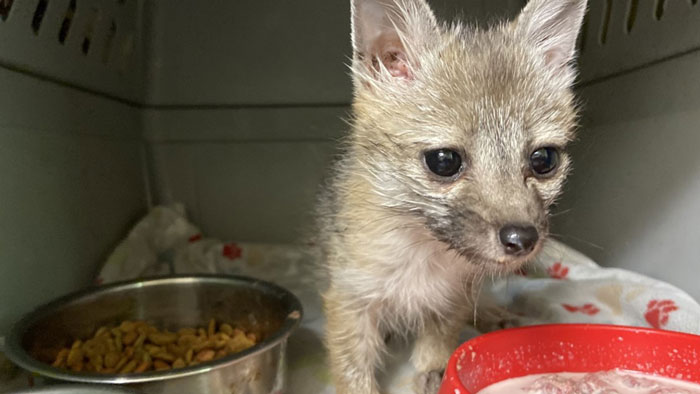 We’ve asked Mitchell if foxes often get lost or abandoned and end up in their care, and how does this happen in the first place? He had this to say: “It can happen several ways—not all of them good. The most common is that the baby animal is injured or is abnormal at birth. In the wild, when a mother has multiple mouths to feed, she may abandoned a baby unlikely to survive so she can concentrate her efforts on feeding those more likely to make it. Second is that the baby is curious and wanders off, gets lost and (in an effort to go back) ends up moving farther away. That makes it difficult, or impossible, for the mother to find him or her.”

He continued: “And finally, humans sometimes interject themselves. It’s natural for a human to see a baby animal (a bobcat, fox, raccoon, or coyote) and THINK it is abandoned. They want to ‘save’ it. In fact, the baby might just be waiting for its mom to return from hunting for dinner (she can be gone as much as 12 hours at a time). They either take it home (where mom can’t follow) or hover around it (which scares mom away). In the end, the baby might have been just find remaining where it was—if the human had not stepped in to ‘save’ it. We generally get more than 100 baby animals each spring. We’re up to more than 70 so far this year – foxes, bobcats, raccoons, coyotes, and javelinas.”