Many people across the world have been affected by the touching story of an elderly woman in California and her senior cat who passed on the same day. The strength of the relationship between people and their animal partners has been demonstrated in this narrative. An elderly couple (who were also grandparents) decided to adopt a cat around 13 years ago. They were visited by the local animal shelter, which offered them a choice of three cats, two of which were kittens. Gabby, a two-year-old tabby, was the third. She made herself at home right away by climbing the stairs and making herself at home on the bed. Gabby seems to have picked them.

Unfortunately, Grandma’s husband died soon after Gabby arrived in their life, and Grandma and Gabby moved into an apartment complex for seniors, where they could get care if they needed it, and the two grew exceptionally close. The two were inseparable from the moment they got out of bed in the morning until the time they went to sleep, with Gabby surrounding Grandma’s pillow. Gabby would snuggle up next to Grandma while she read every day, and the two of them would silently enjoy one other’s company. As the years passed, they both began to slow down at around the same time. Gabby began to distance herself from Grandma, who was losing weight as a result of her lack of appetite. It seems that neither of them had much time left in this world. Gabby’s final shot, taken on Grandma and Gabby’s last day together. 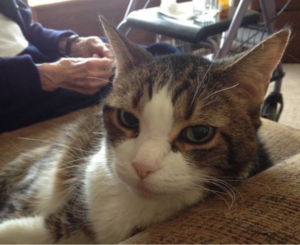 Grandma brought her to the vet, and they determined that putting her to sleep was the best option. As she closed her eyes for the last time, Grandma hugged Gabby and soothed her. Her dearest friend, her soul mate, had gone. Grandma returned home after Gabby had left and napped on the couch. She never regained consciousness. She had passed just four hours after her cherished feline friend. “I like to think that Gabby was there in spirit to comfort Grandma as she breathed her last breath, just as Grandma did for Gabby a few hours earlier,” Jill Layton remarked later of her Grandma.