Dogs have loads of surprises up their sleeves. They don’t wear sleeves, but you get the point. You can never know when your lovely pupper will decide it’s time to snag that bit of meat off the table or to run off barking at the neighborhood cat.

Well, dogs can also surprise you in other ways, like this particular pregnant dog that was found struggling in the streets under the sun and was rescued. And then 15 puppies happened leaving its rescuers shocked, in a good way, of course, with how much this doggie family grew in a day. 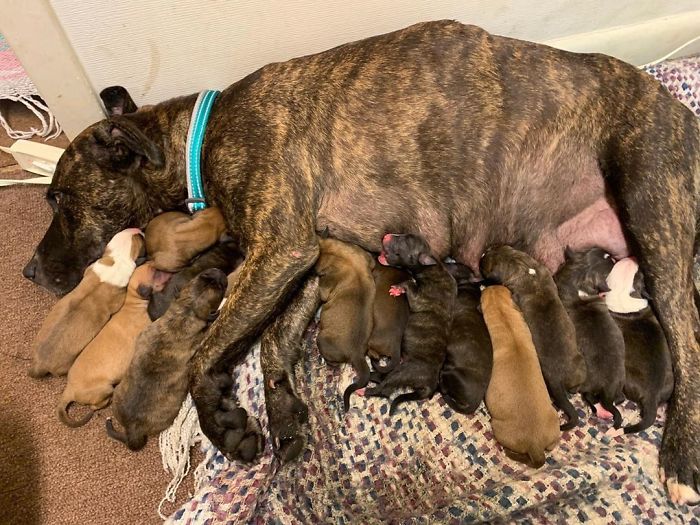 Meet Lil’Mama, the stray pregnant brindle pitbull mix who was rescued by Stephanie Fikes (28), a bartender, and Justin Richie (28), a yoga instructor, and both artists who love animals a great bunch. Bored Panda got in touch with them for an interview.

Fikes was on her way to the store when she noticed a dog in the parking lot, panting under the heat of the sun with her full-blown belly, indicating she’s expecting a litter. She was malnourished and dehydrated. Worried that the dog might be in labor, Fikes called the mama dog into her car and brought her to Richie’s house and made her comfortable by giving her some food, water, and keeping her cool.

The two also took Lil’Mama to the vet to make sure everything was in order. About 20 ticks and a very-much-needed flea bath later, the vet said that the doggo is in good shape, ready to give birth. It was not clear when the birth would happen specifically, as he guesstimated anywhere between 5 minutes to 5 days. Also, unfortunately, they found no chip, so they couldn’t trace the dog to any owner. 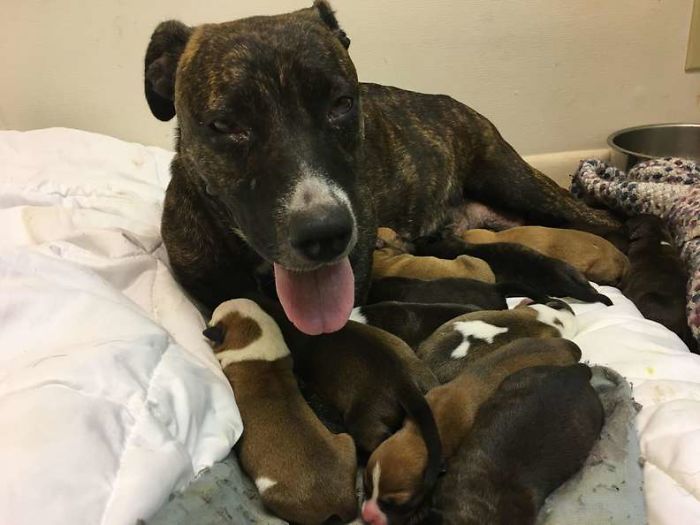 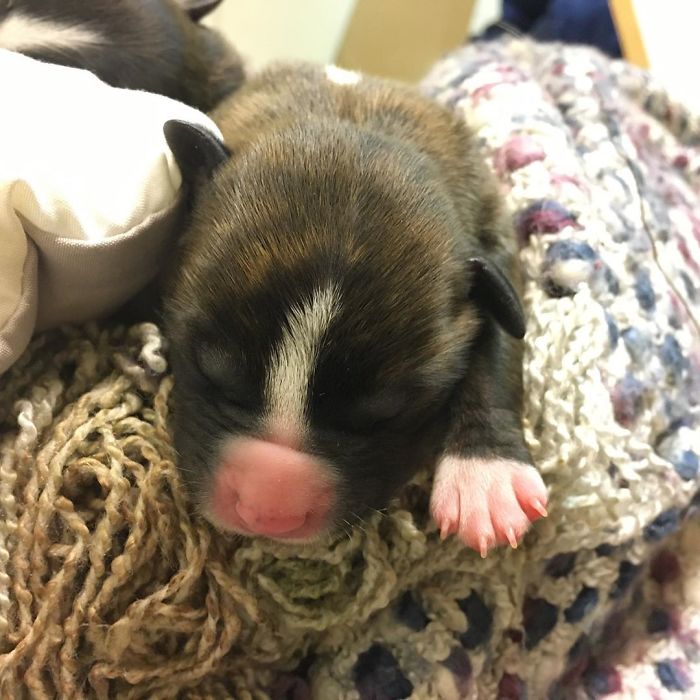 So, they took the mom-to-be home and made all of the necessary arrangements to welcome her puppies into the world. Lil’Mama spent another week with them when Fikes noticed that she’d started to give birth.

“She’s definitely calm, but I would say it’s still too early to tell with all of the puppies—but she’s clearly an incredible dog,” explained Richie what Lil’Mama is like. “There’s no way she has spent her entire life as a stray. She’s house broken, good with other animals, great with new people, and an excellent mother. She does only let Steph and me into the bedroom where the puppies are, but she just gives a warning growl to other people, nothing aggressive. We have truly fallen in love with this sweet soul.”

“Stephanie was comforting Lil’Mama when she said, ‘I don’t want to be dramatic but I think that’s a puppy,’” said Richie. “We made guesses while she was giving birth. I said 6-8 puppies and Steph said 9 or 10. Neither of us expected 15!”

Yes, you read that correctly! 15 puppies later, the two friends now had a family of 16 dogs on their hands. In context, five to six puppies is considered the average number among birthing dogs, and the world record for largest litter was set in 2004 by a Neapolitan mastiff named Tia with 24 puppies. So, 15 is a lot.

Needless to say, the two were shocked with this (in the good sense), as explained Richie: “We were absolutely surprised. Of course, we were shocked, but we feel like this big family was meant to happen and it’s been an amazing experience that neither of us will forget.” 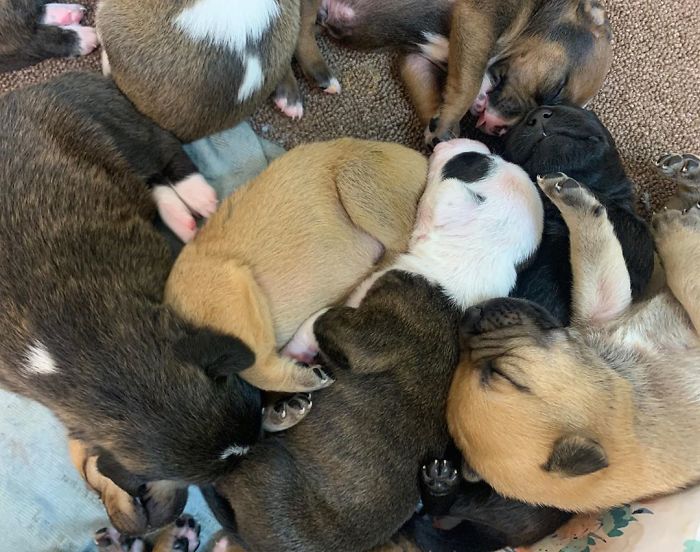 Fortunately, all of the puppies were delivered safely, after which everyone involved was super exhausted but blessed. The birthing process lasted for almost the entire day, so you can imagine why.

Now, Lil’Mama can’t physically feed and take care of all of her babies at once, so Fikes and Richie lent her a hand by feeding the puppies formula. For the time being, the puppies spend their days napping and feeding, but no worries, they are getting ready for when the fifteen little critters start walking and causing shenanigans around the house.

“The hardest part is making sure everyone gets milk. Lil’Mama only has so many nipples and some of them didn’t work until very recently. So, it feels like we are constantly giving someone a bottle or rotating them on Lil’Mama,” elaborated Richie. “Other than that, they sleep, eat, and poop. We know the hard part hasn’t gotten here yet. We’re preparing my home and backyard for the puppy tornado coming through in a couple of weeks.”

The plan now is to give the lovely pupper family a home as Fikes and Richie work towards finding good forever homes for the puppies. Apart from finding the right people to take the puppies in, the two also need to make sure all of the pups get their shots and are taught basic doggie etiquette so that they don’t bring the house down.

So far, with the help of social media and friends, the two are well on their way to making a list of interested adopters who will be taking the pups when they are of the right age.