Master Julian, rescue pig extraordinaire, was saved from the butcher by the American non-profit rescue shelter, Vietnam Animal Aid and Rescue. He was stuffed in a basket on the back of a motorbike, driving by the shelter in Hoi An, Vietnam, one morning in November, 2014, while the animal rights organization was conducting an education program for 40 international students. Along with his two siblings being sold at the age of four weeks to be raised for meat, Master Julian was terrified and hiding his little face. When I took him out of the basket and wrapped him up to take inside, I told the old women around me watching the crazy American lady buying a tiny piglet, “Toi an chay. Toi khong an con heo.” (I am vegan. I do not eat pigs.) They, of course, laughed as I walked inside the gate with my new baby, sadly unable to take all three of the piglets. 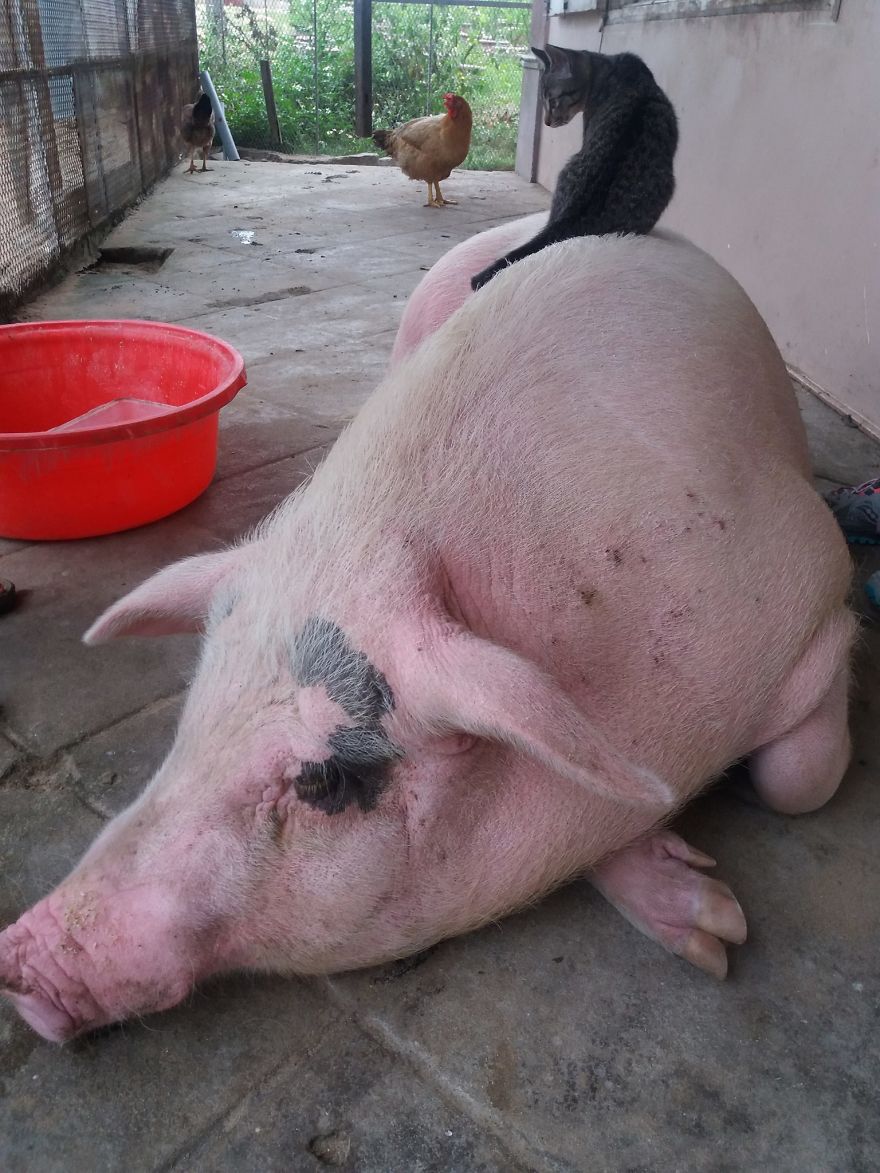 From then on, we have been inseparable. He slept in my bed until he got too big to jump in it. Then, I built him a big barn to share with another rescued pig we got later. He was a very difficult baby to bring up, being far smarter than any other animals I had ever raised, a better screamer than any animal protesting bath time, plus much more stubborn and opinionated than any animals we had rescued at the organization. Ju-bear, as he is affectionately known at the shelter, can open all doors, including the refrigerator door, and can destroy just about anything we think is indestructible. Unlike the popular saying, he does not “eat like a pig” and is actually quite a picky baby, choosing to throw out the vegetables or fruits one day that were perfectly acceptable the day before. 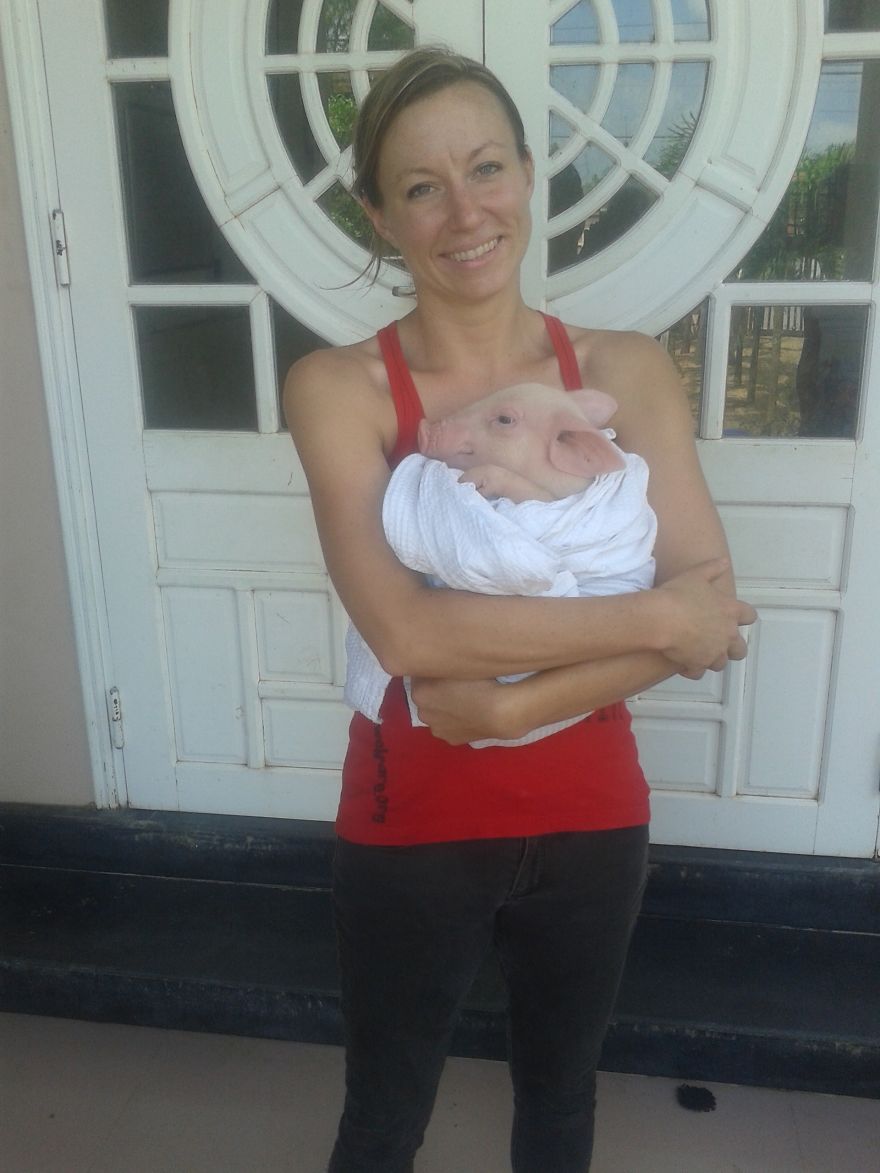 In spite of the complications of raising a 250 kilo toddler, he is by far the kindest soul you will ever meet. He is submissive to our rescued senior Chihuahua, is best friends with a cat, and still thinks he is a lap pig/butt scratcher as he pushes his face under your bum to rub his giant, itchy face on your rear. He adores belly rubs, squeals when you scratch his back, and he can actually pick you up under your bum with his nose if you don’t hang on when he scratches his face! He has full conversations with people, grunting in approval or disapproval, always throwing out a witty comeback to your questions.

Nothing is more infuriating than thinking that this incredible soul was on his way to be a meal, nothing more than a part of a dish that will be forgotten, just quickly chewed up and pooped out with no concept of who he was. People always ask me if pigs are as smart as science says they are, and it is hard to answer that. He is beyond smart. He knows things humans can’t begin to perceive, and I am very sure he can smell a pork eater. He makes sure to lay it on really thick with them to ensure they no longer can look at their meal without seeing his big, beautiful eyes looking back at them. The Ju-Bear has made a few vegans out of our visitors for sure. Best vegan mascot ever. 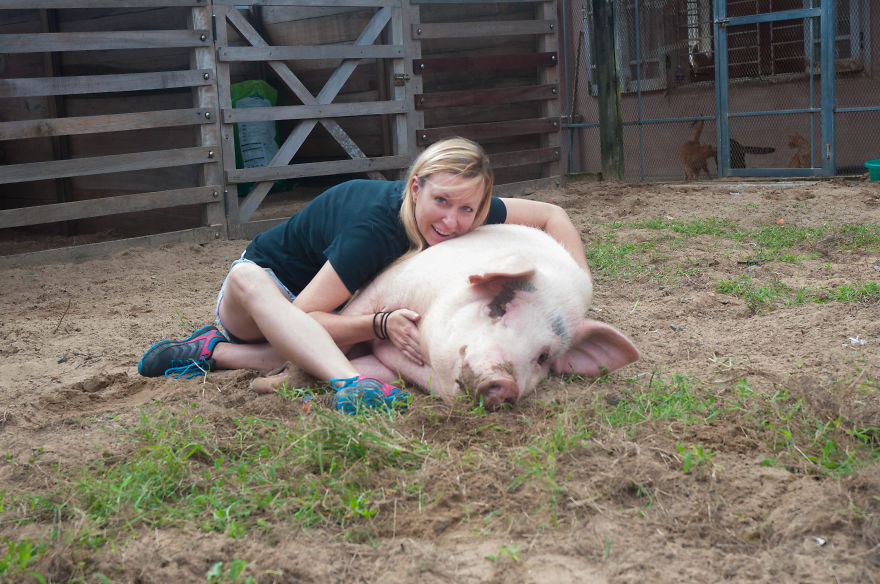 However, Julian is a big boy and sometimes he reminds us of that. One night after a very long and difficult day at our vet clinic, I came into the stall to get some piggy kisses as usual and whisper sweet nothings in his big baby ears. In spite of his obvious anger about me turning on the bright lights while he was sleeping, I ignored him and continued kissing his face. Suddenly, he stood up in protest and accidentally stabbed me in the face with his tusk. I ended up in the hospital with around 20 stitches inside and outside of my face holding my cheek together. I am forever scared by a kiss gone wrong, but continue to kiss him (though with permission now!). Still ranks as the best kiss ever. 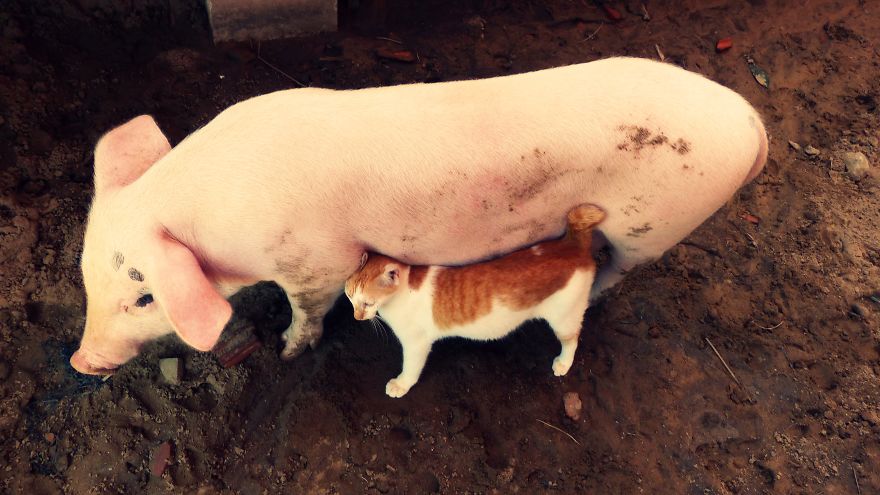 Now that the shelter and farm sanctuary, the very first of its kind in Vietnam, must close due to lack of consistent funding which led to the closure of our international vet clinic, we are moving to Europe where he can have access to proper veterinary care and a safe, healthy life. Pigs DO fly, and we will be sure to document his trip with his pig sister Mistress Lola! This will be an incredibly complicated and expensive process, as well as a historical first for pigs flying out of Vietnam, but there is nothing I would not do for those piggies!