Shaun the sheep really didn’t want his hair cut. Farmers Peter and Netty Hazell found the very shaggy merino ram wandering in brushland on their land in central Tasmania in 2014. It appears the six-year-old sheep had not been sheered for years and had been free roaming through the Tasmania’s wilderness! His tag suggested that he was from a farm hundreds of miles away before he wandered onto the Hazell’s farm. 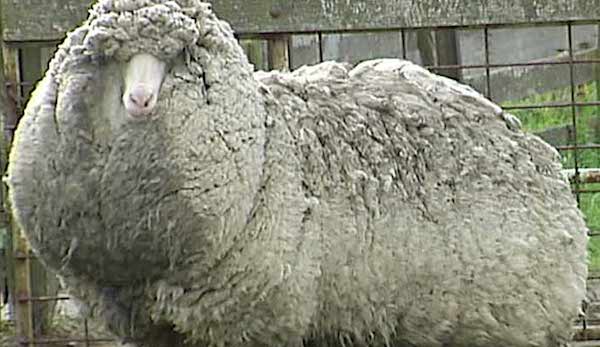 While it was thought Shaun could be the world’s wooliest sheep, his fleece came in at a weight of 23.5 kg (52 pounds), short of the 27 kg (60 pounds) world record held by a legendary New Zealand sheep named Shrek.

Shrek was famous for avoiding being caught and shorn for seven years. Merinos are usually shorn every year, but Shrek hid in caves and avoided the annual muster until he was finally caught in 2004. 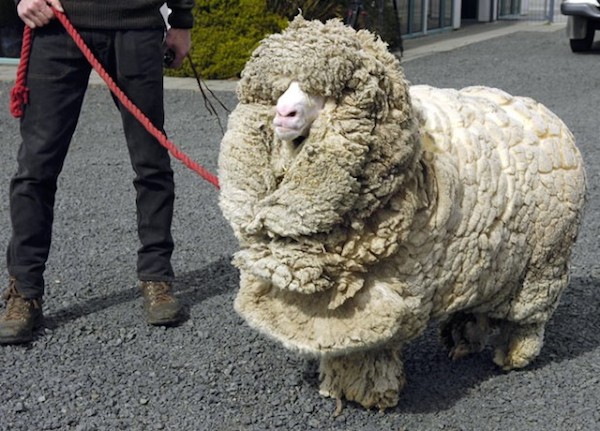 Unlike their wild counterparts, domesticated sheep don’t shed their fleece.

Despite falling short of Shrek’s record, the Hazells said that his fleece was exceptional – it was absolutely beautiful, white and fine. It’s estimated his wool could make up to 35 sweaters.

He’s also enjoying his newfound sense of freedom after the tremendous weight was literally lifted from his shoulders. “He was shaking for a little while after, but that was just because he was trying to get his balance after carrying around all that weight for so long,” Mrs. Hazell told the Mercury News. “Then he just started running around everywhere. We had to put him in a smaller yard so he didn’t wear himself out.”