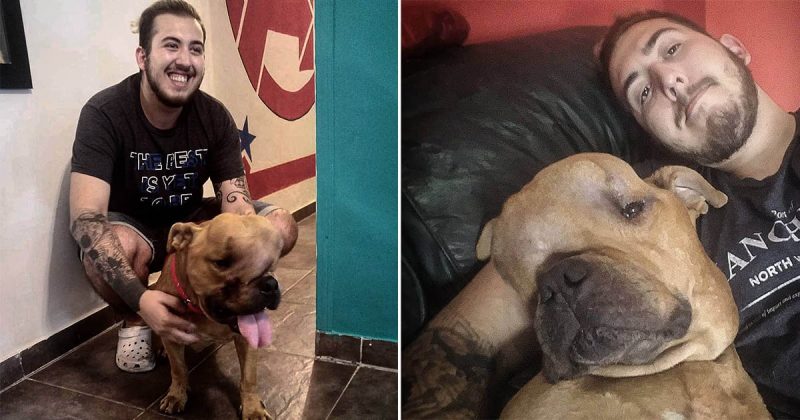 When a guy in Argentina chose to adopt a dog with a tumor so that it may live out its days surrounded by affection, he gave it the most lovely farewell present. Luciano Karosas, a guy from Berazategui, Buenos Aires, had taken the decision to keep the dog in his house during his final weeks.

Before being adopted, the dog, whom he named ‘Thanos,’ was known as ‘Coconut,’ and had previously been rejected by numerous homes owing to his condition.

Fortunately for Thanos, Luciano emerged, and upon hearing his terrible narrative, he instantly decided to transform his final days on Earth.

Thanos was diagnosed with cancer, which soon traveled to his skull, causing a gigantic tumor to develop.

The dog was formerly part of a family, but when they realized how difficult it would be to care for it owing to the condition, they opted to abandon it.

He was then taken in by numerous families, but they were unable to cope with his condition, so he was returned to the shelter, where he met Luciano.

When the 21-year-old learned of Thanos’ tragedy and that he only had a few days to live, all he could think of was a solution.

Luciano’s enormous heart told him that he should adopt Thanos, take him home, and shower him with affection in his final days.

“I came out clutching a bit of my heart.”

Without a question, Luciano wanted to make Thanos’ final days memorable, but he couldn’t accept that he couldn’t do anything to improve the animal’s health.

“It was tough for me to adjust to the fact that we would be spending so little time together.” I brought him to a stem cell vet to see what we could do (since he had been given 40 days to live) and he stated there is no therapy that can prolong that time.

When Luciano learned of the tragic news, he just determined to make the most of the time he had with Thanos as his cherished pet. They spent a lot of time together; Luciano groomed and cared for him as much as he could, Thanos appeared to be content, and he even played and cuddled with him like any other dog.

The couple of friends were unconcerned about the fatal condition; all they wanted to do was make the most of their time together and have as many wonderful moments as possible.

Thanos, however, could not endure the intense disease and died after several weeks of happiness and love.

Luciano was disappointed and distraught, but he said his final goodbyes on social media, wishing him a “Good voyage” and saying, “I will love you forever.”