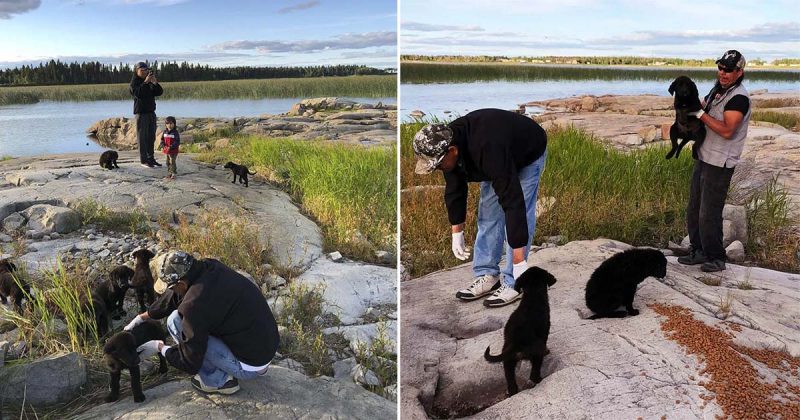 Junior Cook was scuba diving in Cross Keys, Manitoba, on a small Canadian island, unaware that he would be a part of an incredible rescue. He and his companion noticed a variety of unusual noises emanating from the little island, which was supposed to be abandoned, while boating.

They didn’t pay much attention to what transpired because they thought the island had been abandoned, but Junior’s mind was on it, so he planned to return the next day.

Junior was concerned about the situation and suspected that the sounds were shouts from someone in need of assistance, so he decided to look into it more.

Junior couldn’t believe his eyes when he got at the location; there were seven abandoned pups whimpering and roaming about the island in agony.

The man wanted to assist them and couldn’t leave them there, so he called Manitoba Animal Alliance, a local animal rescue group committed to rescuing animals and sending them to local shelters or other regions in search of a permanent home.

Fortunately for the puppies, this group agreed to assist in the rescue and was willing to put their whole experience to use in order to save them.

“This is not an unusual occurrence; it occurs on a daily basis in Manitoba and throughout the world.”

Junior and his companion initially assumed the noises were coming from wolves, but thankfully, he returned to the island to investigate.

“He and his companion were out and about when they heard some noises on the island as it was becoming dark. They looked through their binoculars and saw nothing but black shadows and heard a lot of weeping. They initially mistook them for wolves.

Although the group was eager to assist as soon as possible, arranging transportation for this particular situation proved to be more difficult than anticipated. As a result, they agreed to bring food packages to the dogs to feed them over the next several days while they worked out a plan to transport them off the island.

Junior was a valuable asset throughout the rescue procedure, even delivering food supplies to the puppies on a daily basis.

The small ones were very emaciated, on the edge of death, and so hungry that they ate a whole package of food on the first day.

Although the dogs were first wary of Junior’s boat and retreated away whenever they saw it, this changed as the days passed and they became more friendly.

The cubs were eventually rescued from the island and transported 330 kilometers to Winnipeg, where the Winnipeg Pet Rescue Shelter took them in.

They were given the names Skipper, Gilligan, Mary-Anne, The Professor, Ginger, Lovey, and Mr. Howell after it took some time to figure out their characteristics.

Despite the fact that they were now protected, the puppies need immediate medical treatment to address their health issues.

“They were treated for fleas, tapeworms, and malnutrition and will be placed up for adoption once they are well.”

The puppies had overcome all of their health issues and were ready to be adopted and find a permanent home after many days of therapy.