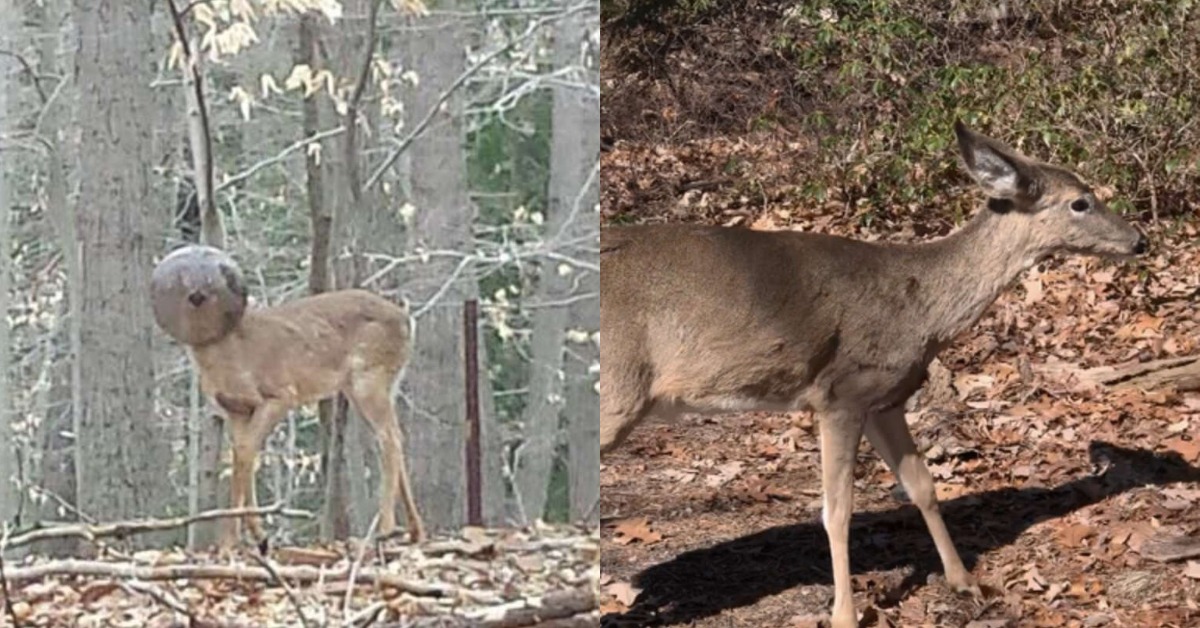 Residents of New Jersey are accustomed to seeing herds of white-tailed deer grazing in backyards and along the sides of highways, especially when the weather warms. Last week, though, a homeowner in Colts Neck was treated to the season’s biggest surprise when he spotted an animal unlike any he’d ever seen before.

The creature had a hairy brown body, spindly legs, and a perfectly spherical head, almost like an astronaut’s helmet, in the dark.

The homeowner discovered the strange creature was actually a young buck upon closer inspection, and he was in big danger.

The buck had gotten his head stuck in a glass bowl, and if the hefty headgear wasn’t enough to make him stand out, the fact that he was traveling alone made him much more visible.

The buck could only eat and drink after his herd had departed their grazing place since he was shunned by his family. “In order to avoid inviting predators or disrupting the integrity of the herd, certain animals will consider individuals as outsiders if they look different or are injured,” the Monmouth County SPCA (MCSPCA) stated in a news release.

Because of the glass barrier around his head, the juvenile buck had been unable to graze on blossoming trees and plants for days. As a result, the homeowner sought assistance from the MCSPCA as well as the NJ Division of Fish and Wildlife.

The rescue crew started to work as soon as the buck was located and anesthetized. “The glass bowl was removed, which proved out to be a light fixture cover, which was presumably filled with water the deer attempted to drink,” the MCSPCA stated on Facebook. “The buck was dehydrated after four days without food and drink, and he had a number of scratches from the poor visibility, but when we cleaned him up and the sedation had worn off, he was able to get up and go away.”

While the deer’s strength looked to have returned once his head was released, he still need assistance during the Easter holiday. Later that day, the MCSPCA received another contact from the worried neighbor, who noted the deer had retreated and was having trouble breathing, unable to locate his herd.

Deann Bowen, a veterinary technician with the MCSPCA, raced to the scene and gave the deer fluids, which appeared to work. “By the way he appeared, we could tell he was severely dehydrated,” Bowen stated in a news statement. “His head perked immediately up when we gave him the drinks, and his respiration returned to normal within a few minutes.”

Rescuers watched as the deer regained his footing, took a few shaky steps, and then bolted over a fence and into the woods. The young buck can now enjoy a season of regeneration and enjoyment after surviving a harsh winter of snow and shortages, made worse by an accidental run-in with a discarded light fixture.

The Monmouth County SPCA has been informed that there is no longer a lone deer feeding, therefore it is gladly expected that he has rejoined his herd, according to the news release.