When Mike Wilson and Megan Hanneman decided to drop by the Humane Society of West Michigan one day in April, they didn’t expect to leave with a new pet.

The couple had been discussing expanding their family with a kitten, but when they spotted Bronson — an enormous, 3-year-old orange cat weighing a whopping 33 pounds — it was love at first sight.

Bronson struck quite an imposing silhouette among the other felines at the shelter, and the couple couldn’t help but be impressed.

“When we first saw him, we were shocked at how big he was,” Wilson told The Dodo. “Neither of us had seen a cat that size before and we thought he was so cute and cuddly, like a large stuffed animal! We immediately went over to gaze at him from outside his room.” 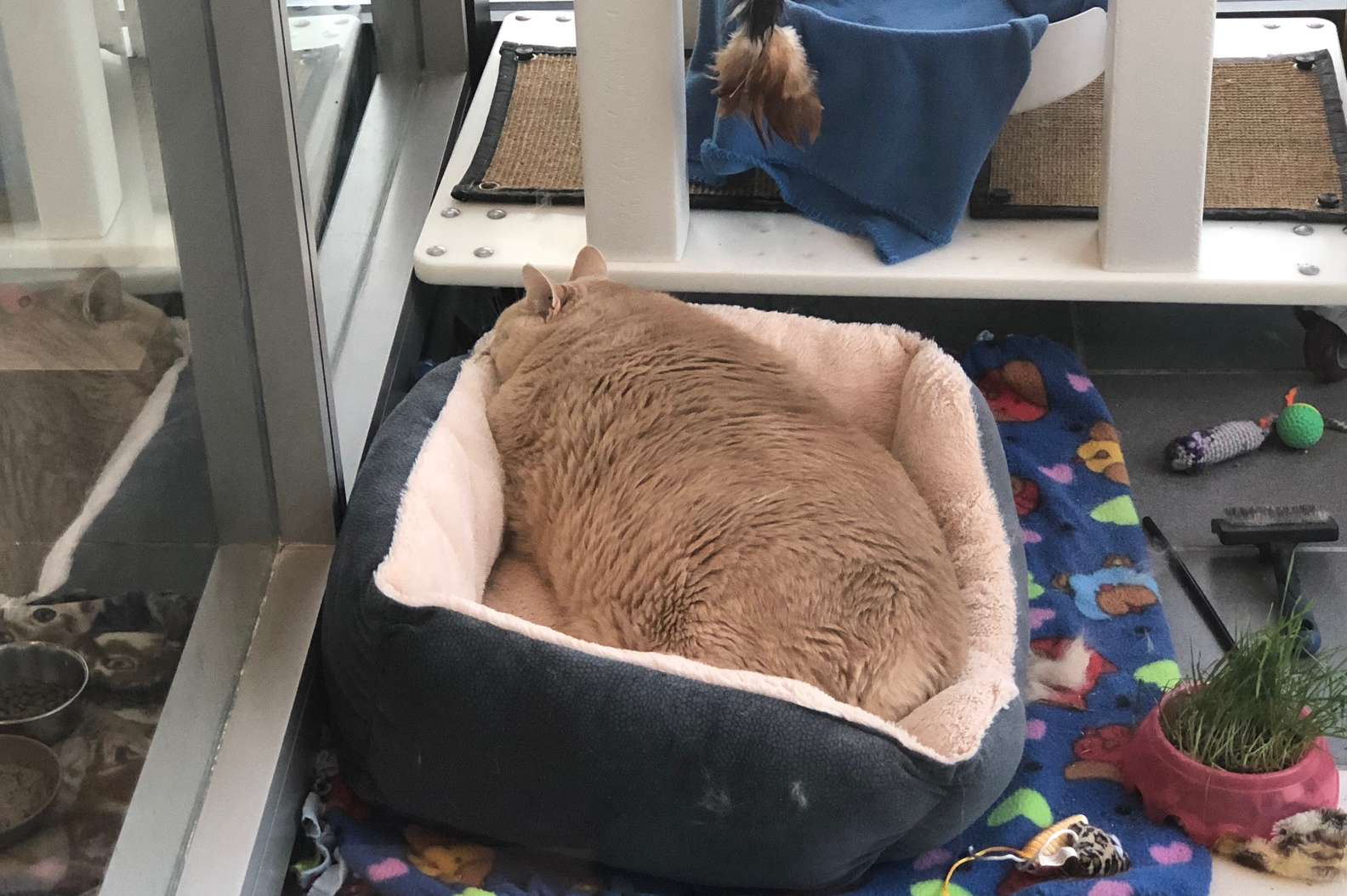 Wilson and Hanneman waited in line to be interviewed so they could meet Bronson, but had to leave for work before they were able to sit down with the shelter employee.

Still, they couldn’t stop ogling the snapshot they had taken of the enormous cat before they left. “On the way to work, we were talking about him nonstop and started regretting not sticking around for him,” Wilson said.

As the day wore on, the couple’s fear that Bronson would be adopted grew, so they rushed back to the shelter as soon as they could.

“We started feeling like he would be adopted in no time because of how quickly we were drawn to him,” Wilson said. “We returned right when they opened the following day and were so happy to see him again!” Bronson had come to the humane society after his elderly owner passed away. Shelter workers were told that he was called “Fat Kat,” and that though he had lived in a home with multiple pets, he was a bit of a loner and always kept to himself.

No one was quite sure how such a young cat had gained so much weight.

“The staff changed his name once they brought him in, but his naming kind of sheds light on how seriously they were taking his obesity,” Wilson said. “Their best guess was that he was fed either too much kibble or was being fed table scraps.” At Bronson’s size, he stood an increased risk of cancer, heart disease and diabetes, along with many other health complications. The interviewer warned the couple that Bronson’s eventual adopter would need to help him lose weight at a slow pace through diet and exercise. The young cat’s hefty measurements also made it difficult for him to adequately clean himself, so they would need to brush him daily to help keep his backside clean.

When Wilson and Hanneman finally met Bronson in person, they were shocked by how love-hungry the cat was, seemingly desperate for pets and affection. And though their hands were oily after touching his striped orange fur, the couple knew they had to bring him home. 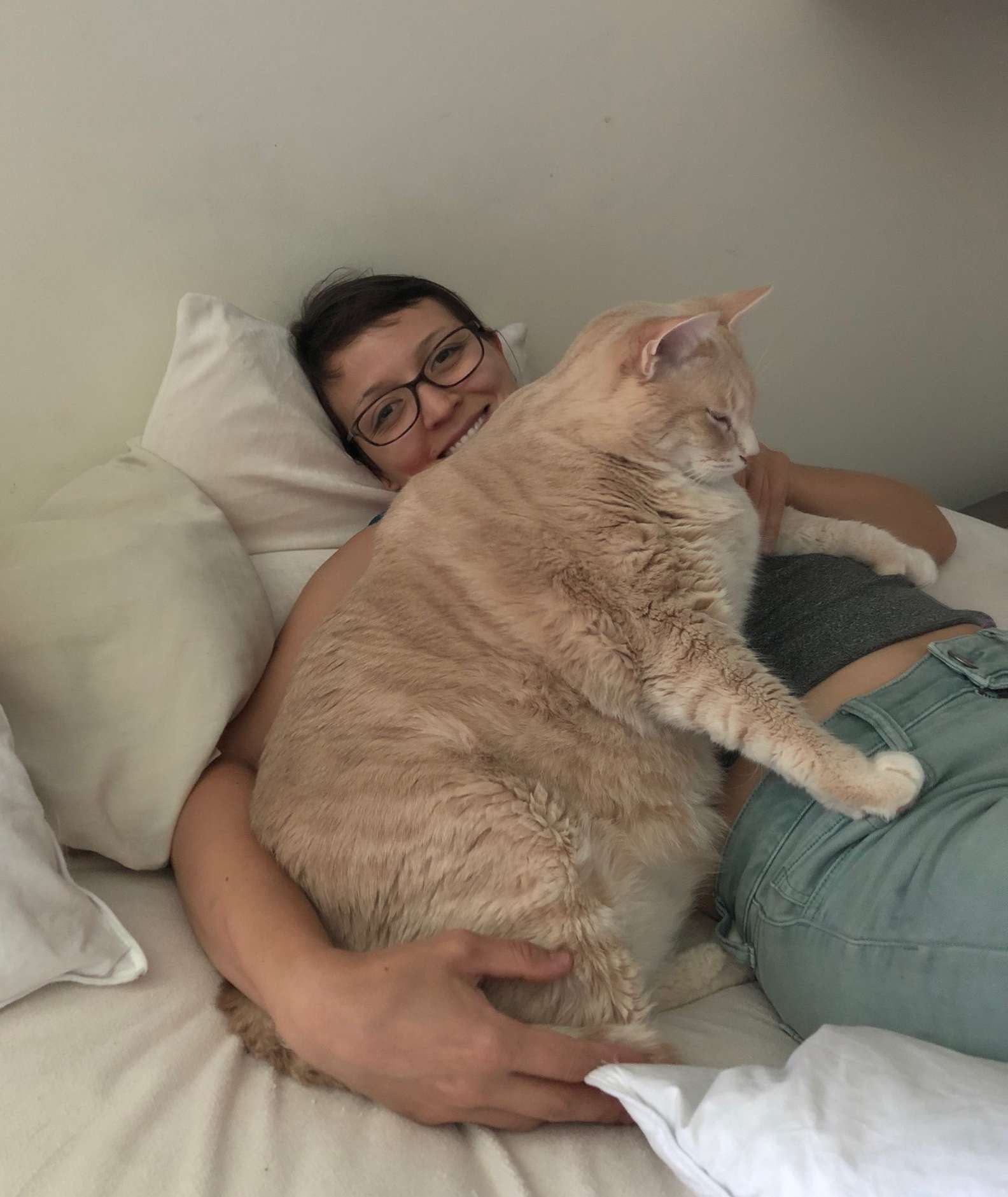 “He was quite unkempt and had a lot of dander in his hair, mostly due to him not being able to groom himself because of his size,” Wilson said. “I just wanted to take him home, clean him up and care for him.”

While Bronson may not have been social in his past life, at his new home, he enjoys hanging out his two cat siblings. His companions have, in turn, encouraged Bronson to explore the house and play with the toys littered about each room.

And his owners couldn’t be more happy to see the once-shy cat come out of his shell.

“When we first brought him home, he kind of did his own thing throughout the day and stayed in our bedroom,” Wilson said. “Nowadays, he is waiting for us by the door with our other cats when we get home, he runs out to the kitchen if he hears a ruckus of cans opening and hangs out with the other cats in the living room in the daytime. He is actually a really social kitty.” 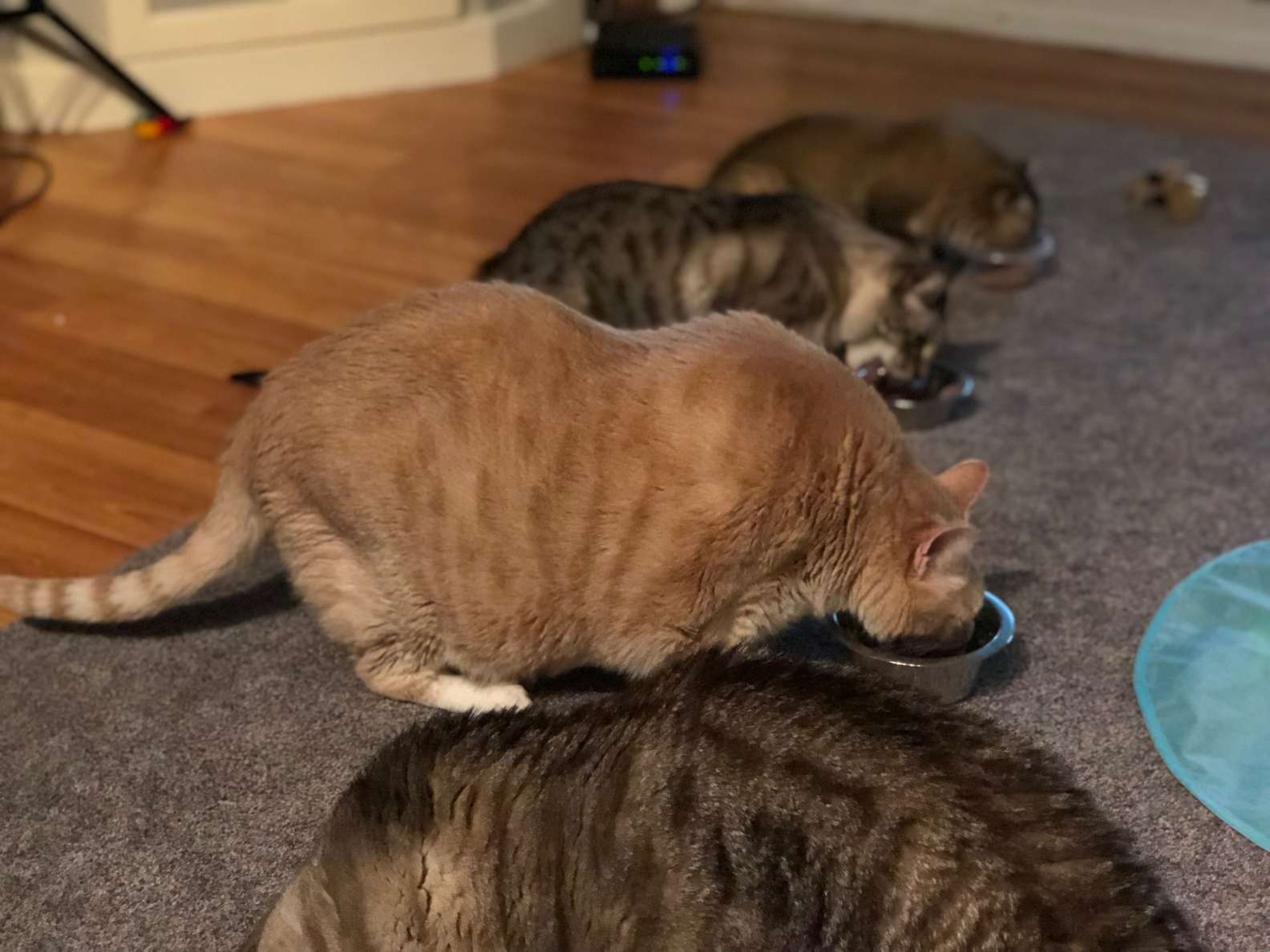 Though Bronson hasn’t yet slimmed down significantly, in the care of Wilson and Hanneman he’s well on his way to becoming an active cat once again.

“His weight loss journey has been going very well and we can already see a change in his shape, where he has a lot more definition in his arms and shoulders,” Wilson explained. “His front arms used to buckle a little when he jumped down from our couch and now he jumps down without a problem.”

This rainbow toy has been amazing!! Over the last couple days Bronson’s been lasting longer and longer during play time. I feel like he’s going to have a six pack in a year. 🏋️‍♂️🤼‍♀️🥊❤️ #rainbowcatdancer #fiveminutefitness⚡👟⏰💪 #healthylifestyle #weightlossjourney #weightlosstransformation #weightloss #sixpack #bufftabby

The couple, who build wall-mounted furniture designed to help promote exercise for indoor cats, hope that one day Bronson will be able to enjoy their creations.

“Although we originally wanted a kitten to help us test the furniture ideas with our other two cats, we saw Bronson and kind of forgot why we were there,” Wilson said. “We saw how big he was and thought it would be so fun to work with him to get healthy and then one day get on the furniture.”

Once Bronson has lost enough weight to be able to safely take flea and tick medicine, he will join his parents for walks outside. “His life is going to look much different a year from now,” Wilson added.

Everywhere Bronson goes, he attracts attention — not just for his size, but for his sweet, peaceful personality.

“Everybody that meets him can’t believe how big he is and instantly want to pet him,” Wilson added. “When we first brought him to the vet, everyone took turns coming in our room to meet him until there were like five vets and techs in the room at once. It makes us feel so lucky to have him.” 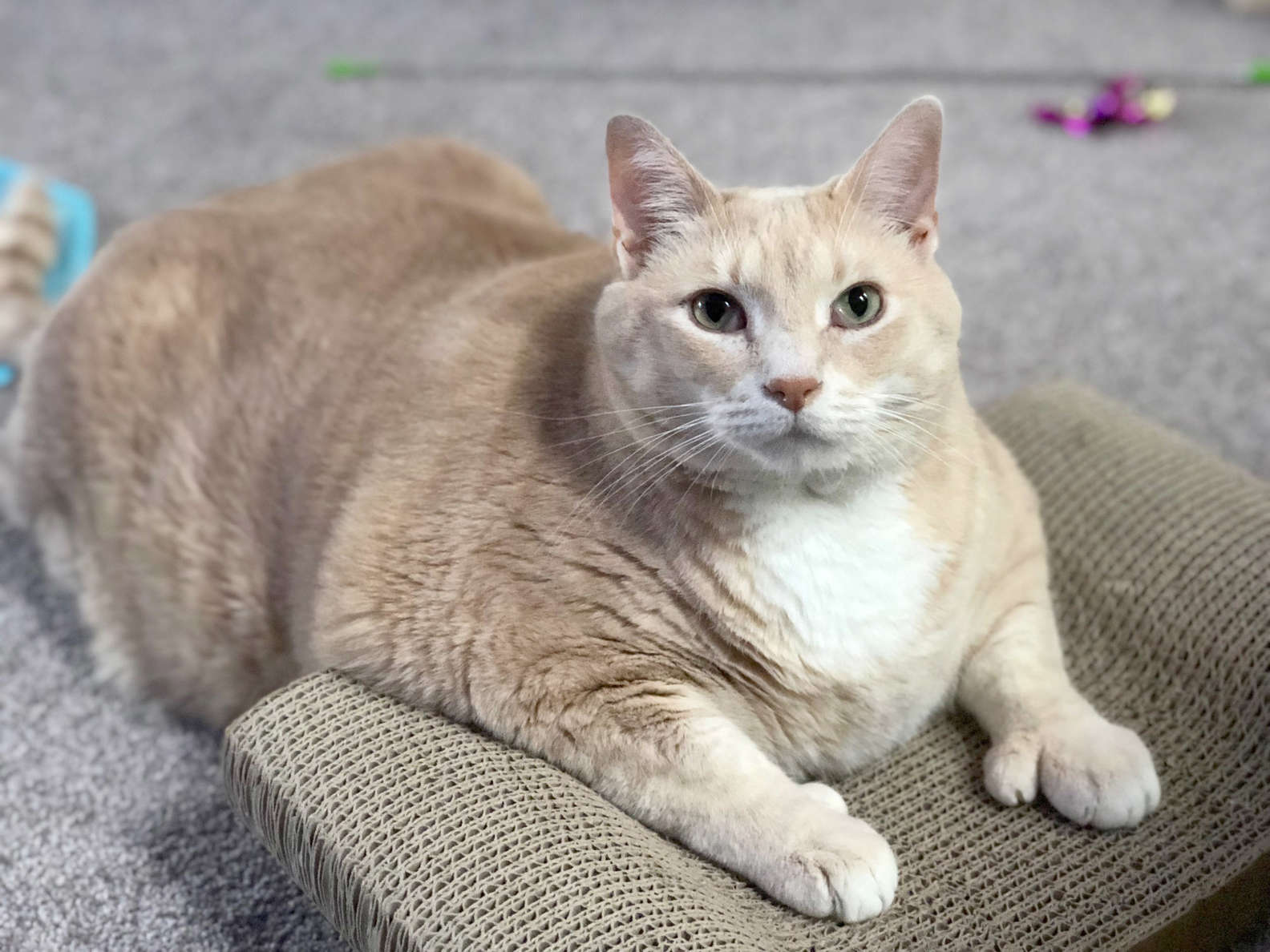 Even his parents can’t help but pet Bronson every time they see his big, cuddly body — though they have since discovered that even the cat who can’t get enough affection does have his limits.

“It’s hard not to walk past him and pet him and we probably do that more than he would prefer,” Wilson said. “Sometimes we’re like, ‘Hey buddy!’ and go to give him pets and he just grunts and turns around. He’s like a celebrity.”